I’ve been doing a series on standard business plan financials, summarizing the basics so anybody who runs a business can know and understand the numbers. This one is a special follow up to How to Project Cash Flow and LivePlan Cash Flow last week. Indirect cash flow forecasting is a valid and often convenient method to look ahead at cash flow.

This one is about a very common alternative cash flow method, called indirect, which projects cash flow by starting with net income and adding back depreciation and other non-cash expenses, then accounting for the changes in assets and liabilities that aren’t recorded in the income statement. This one comes from the Sources and Uses of Cash Statement that frequently serves as a surrogate for a Cash Flow in formal financial statements.

Sources and Uses works great for analyzing cash flow after the fact, with past financial statements. It’s a simple way to understand where the money came from and where it went. For example, the following illustration would show the bicycle store Projected Sources and Uses for a hypothetical February of a hypothetical new year, with the same numbers shown in the that previous post on cash flow and in another previous one on Projecting the Balance Sheet: 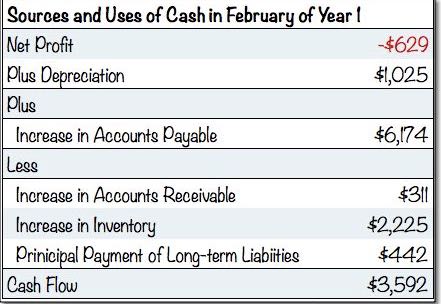 Notice that this seemingly simpler method produces exactly the same cash flow projection as the direct method. When you turn back to the previous and compare it, the direct method involved more than 25 rows of calculations (many with zeros in them) compared to the six rows here.

While this works great after the fact, when you know what happened, there is a catch in using this method for projecting the future: We don’t know whether any given item is a source or a use of cash in any future month. For example, in the bicycle store projections for June of Year 1, both Accounts Receivable and Inventory amounts decreased, so they became a source, not a use, of cash; so the layout has to change for a Sources and Uses cash flow: 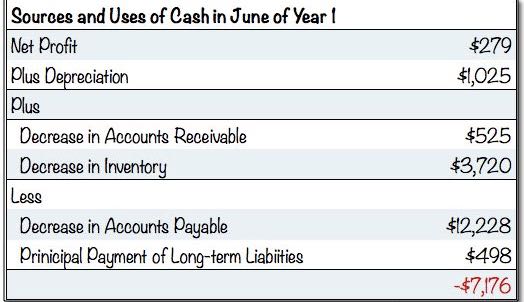 During my years with financial projections, I’ve developed an alternative to Sources and Uses, also based on the indirect cash flow method, which works better for the ebbs and tides of projected balance amounts over months and years. The following illustration shows how it works: 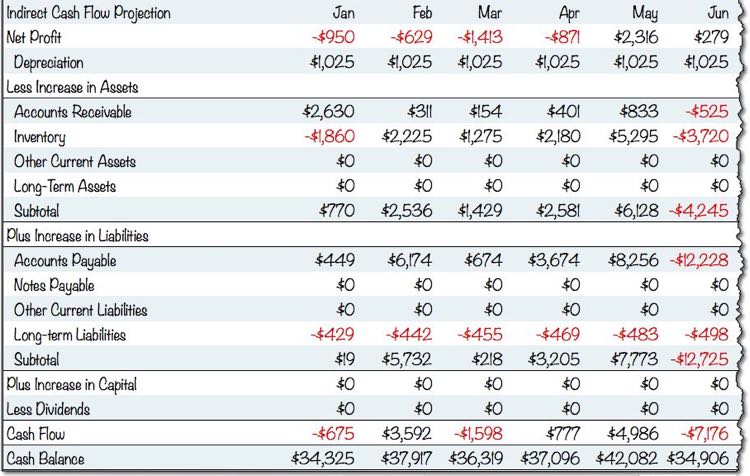 Either direct or indirect cash flow methods, when applied correctly, give the same results. I find the direct method, despite having more rows, is generally easier to understand because as you make inputs you are projecting payments or receipts, money going out or coming in, while with the indirect method you project changes in balance amounts.

In fact, for years now, I usually include both methods in my projections, so that the one provides an automatic error check of the other.

And – important note for our LivePlan users – LivePlan also does both, behind the scenes, and checks them, one against the other. The spreadsheet-intensive views here are not needed with LivePlan, but your cash flow is based on these same calculations.