If You Should Have Done it Then, Do It Now

The best time to plant a tree is twenty years ago. The second best time is now.

As you can tell from the illustration here, that’s an African proverb, 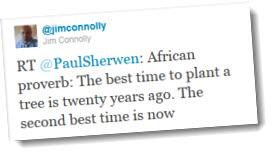 and I got it from Jim Connolly on twitter, and he got it from Paul Sherwen, also on Twitter.

(Aside: this is another illustration of why I like Twitter and how I use it – as a window to what some people I respect are saying, writing, and suggesting.)

There’s a clear business lesson here. How often do you not do something today because you should have done it long ago? I do that more often than I want to admit. I think most of us do.

I did the same damn thing with blogging. When I first really thought about blogging it was already 2005 and I kicked myself for not having started in about 2001. So net result was I didn’t start blogging. On the other hand, at least I finally did start in 2007, which means I now have four years of it, and 1,232 posts published (counting this one).

Don’t not do it now because you should have done it sooner. Right?