Very much better late than never. The iPhone software upgrade released today added a GPS-like location feature to the iPhone’s Google maps implementation, instantly turning a weakness into a real strength. I love it.

It isn’t a real GPS. It uses triangulation from cellphone towers. 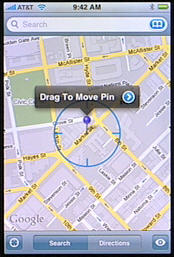 It won’t show you moving on the map as you move in real time. What it will do, though, is show you were you are. Push a button, and the map application centers on wherever you are.

I imagine it won’t work when you’re away from cellphone towers. And it doesn’t follow you around. But wow, what a nice improvement.

I loved the iPhone already, but I missed the GPS feature. Now it’s there for me, or close enough; and it doesn’t mean carrying around an additional GPS receiver. It’s on the phone.

And here’s an interesting side note, from a confessed iPhone lover. I also love GPS. I’ve carried a portable Garmin GPS with me on trips, and discovered, to my disappointment, that while walking in cities it frequently gives up on me because it can’t find the satellites. Buildings block its access. So maybe the iPhone is better in that respect. I tend to need map assistance more in the cities than on open highways.

The new update has some other interesting features, including customizable home page buttons, and movie rentals through iTunes, and new compatibility with some limited custom applications.

So it’s been nearly six months now. I bought the iPhone the first day, I was one of those who paid $600 for it, which became $500. I really like this phone. In all the initial analysis, many reviewers analyzed the features in detail without spending enough time on the simple ease of use. It searches maps for phone numbers, it gets and sends my standard email, it lets me manage voice mails one at a time and not necessarily sequentially, it’s very easy to find information and push with my fingers. It’s a really nice gadget. I’m very happy with this phone.