How to Make Personal Posts Into Good Business Blogging

This is good advice for any father, any day: Top Ten Father and Daughter things to do, by John Espley on an Accent Inns blog;  but I’m posting about it for its blogging and business implications more than just its content. If you’re a parent, of either gender, and whether you have daughters or sons or both, it’s good advice. And whether or not you’re a parent, it’s an interesting example of business blogging.

1.  Focus is better than general. 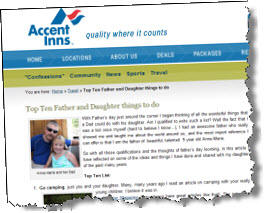 2. You can’t fake real. You have to be authentic.

I’ve never read John Espley but as I read his post today I totally believe he’s the father of a young daughter. He couldn’t fake it.  That makes his focus in point #1 stronger. He adds real details. His father-daughter suggestions are all things he’s done with his little girl. It’s obvious. And maybe this is why focus works — if he talked about father-son or parent-child, it wouldn’t be as specific, and the details wouldn’t feel as real as they do.

It’s sad that camping and fishing are stereotyped as father-son activities, but it’s also true. So when John leads with camping in father-daughter mode, he goes off track. It’s unexpected. Dog bites man is boring, so this is man bites dog. That’s always more interesting. Screw stereotypes. That makes better reading.

4. Authentically personal stuff can be good for the business

John is business development manager of Accent Inns. Notice that his post isn’t about Accent Inns or the lodging business or travel in British Columbia; and it starts out recommending camping, not staying in an Accent Inn. However, I think it still fits, somehow, with John’s business position. Here I am blogging about Accent Inns, because of his post. I’ll look at them first the next time I’m headed for BC, because I like that post. And camping and fishing gets people out and about, and could involve a stay at the inn as part of the program. I think this is a good example of how personally authentic is also business friendly.

Frankly, I struggle with this a lot. Blogging is a big part of my job, but nobody pressures me to post about the company or the product. Occasionally I do because I can’t resist. But my blog is about me and what I think, stories I want to tell, advice I want to give, mistakes I made that you should avoid, and so on.

Lately I’m watching this same struggle again (and funny how this goes back to the father-daughter theme this post started with) as I watch my daughter Megan blogging as marketing manager for Klout, which measures online influence. She just did a great post on Mashable on Twitter strategies, without specifically mentioning Klout. But metrics are critical to strategy and Klout is the best in the business on Twitter metrics. Should she have mentioned Klout specifically? I doubt it. Does she lose credibility if she does? I think so. No matter how well you do it, if you’re pitching a product people sense it and it diminishes the realism and authenticity.

(ps: thanks to Ross Dunn for putting that post on Twitter. I wouldn’t have seen it otherwise.)