First off, no, I’m not about to deliver one of those annoying "what’s the problem, we’re all fine" arguments you get from incumbent politicians. Merrill Lynch, Lehman Brothers, AIG, plunging dollar, huge federal spending deficits … these are very definitely hard times.

Secondly, this post, remembering the hard times of the 1980s, comes complete with a musical background, a song called "Hard Times" recorded during those hard times, by Lacy J. Dalton. (Warning: it sounds a lot like country music, so if that bothers you, or you’re allergic, please don’t click the link).

So, having cleared that up, back to my point: There’s a very timely post today titled Remembering the 1980s on Small Business Labs. Steve King puts up this simple eloquent business chart first: 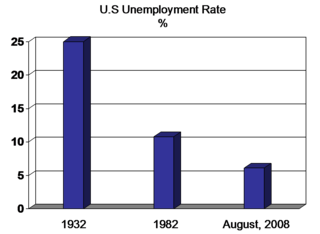 And adds some relevant memories of those times, 25 or so years ago, which were pretty tough:

The unemployment rate peaked in 1982 at 10.8%, which was nowhere near depression levels but substantially above where we are today.

Inflation and interest rates were also high compared to today.  At the beginning of the 1980s inflation was over 10% and mortgage interest rates were over 16%.   GDP growth was negative in 1982 (-1.9%) versus positive growth so far this year (+2.1%).

He has a good point. Things look really bad right now, macroeconomic things like the financial industry failures, the mortgage problems, the dollar plunging, the trade deficit, the federal spending deficit, and so on. But then I remember, as well, how hard it was to find a job in 1981, and to buy a house in 1982. We had a fixed-rate mortgage at 18%. And yes, that was the U.S., not Mexico.

And then he adds this other eloquent chart… 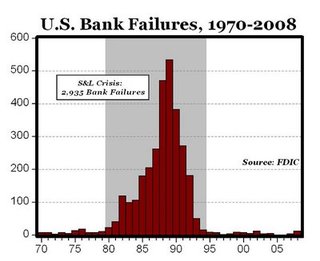 Good to remember. It’s not all that bad. Let’s keep our fingers crossed.