I realize it’s a bit out of date, a 1987 b00k, but Paul Hawken‘s Growing a Business is still my favorite business book. 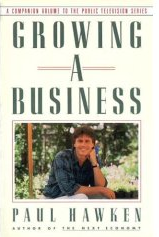 It’s the first one I recommend.

Hawken tells real stories of real businesses wrapped around people doing what they like because they like doing it, they think it should be done, and the doing of it flows simply into the logic of filling needs and offering value. Two guys in Vermont get involved with their ice cream. They start selling it. It ends up being Ben and Jerry’s Ice Cream. It’s a great story.

They aren’t all bearded ex hippies. The stories include a bank in Palo Alto, Patagonia (outdoor clothes), Apple computer, etc. What they have in common is a sense of organic, natural growth from the foundations of doing what you want to do, when that’s something that other people want to have done.

It helped for me that I was a customer of the bank in Palo Alto, and of Ben and Jerry’s, Patagonia, and Apple Computer, and my wife loved buying at Smith and Hawken. I believe in the underlying idea that businesses depend on value — value to the customer — and values — the people in the business have to believe in it.

ps: I shared the podium with Paul Hawken in the late 1980s, at Apple, when I was speaking on business planning and he was speaking about the ideas behind this book. He seemed a man whose persona was based on ideas, on the underlying values. I’m not surprised at the way his career has gone since.