Growing Your Business: What Got You Here Won’t Get You There

This was more than 10 years ago but I still remember it well. I was walking to lunch with a friend and long-time business planning client talking about our growth at Palo Alto Software. We had doubled revenue in the previous two years. These were good times. But my friend had a warning:

Be especially careful at this point. It’s two times harder to go from 25 employees to 50 than from 10 to 25. 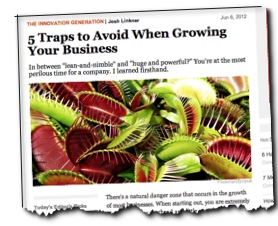 That didn’t make sense to me then, but it does now. It’s related to culture and accountability and leadership. What reminded me was Josh Linkner’s 5 Traps to Avoid When Growing Your Business on Inc.com. Especially his #3, which he calls “Putting Religion Ahead of Science.”

When you were a start-up, all you had was your vision and belief (aka “religion”). Your burning desire fueled you and the company to break through start-up gravity and get your business off the ground. As you grow, however, religion alone won’t be enough to sustain your trajectory. My business partner, Dan Gilbert, often says, “What got you here won’t get you there.” In most companies’ evolution, there comes a point where systems have to be documented, training materials established, and processes architected (aka “science”). Without this foundation, a company fueled only by passion derails, since your 126th employee won’t possess the same fire as team member No. 6.

The emphasis there is mine, by the way.

Josh has several other good points on this list. Gorging opportunities, for example, meaning trying to do too much. This is also really good:

Remember this: More companies die of indigestion than starvation. When you look back five years from now, your success will based much more on the times you said “no” rather than the times you said “yes.” As the old Chinese proverb states wisely, “Chase two rabbits and both will escape.”

Good stuff. Nice post. And we don’t talk enough about this second inflection point, getting a company through its adolescence. It’s hard to do.