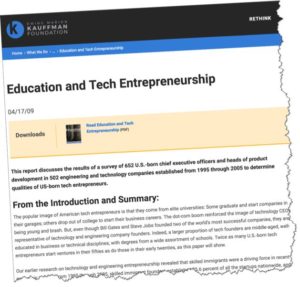 Contrary to popular startup myths and misunderstanding, tech founders aren’t mainly younger than 30. They are generally well educated, not dropouts. They tend to start up where they are, instead of moving to Silicon Valley or other tech hubs.

Here’s a summary of data published by the Kauffman Foundation:

We observed that, like immigrant tech founders, U.S.-born engineering and technology company founders tend to be well-educated. There are, however, significant differences in the types of degrees these entrepreneurs obtain and the time they take to start a company after they graduate. They also tend to be more mobile and are much older than is commonly believed.

Top-rank universities are over represented

They start closer to home