Go Ahead, Search Me … and Give Me Better Info

What bothers me isn’t that Orbitz steers Mac users to pricier hotels, as WSJ.com reports; it’s that some people act like that’s somehow illegitimate, unfair, or deceptive. 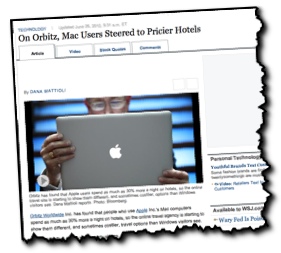 I say, on the contrary, give people what they like.  Not everybody wants the cheapest hotel available. Many people prefer paying a bit more for something better. And what’s wrong with that?

Orbitz Worldwide has found that people who use Apple Inc.’s AAPL +0.22% Mac computers spend as much as 30% more a night on hotels, so the online travel agency is starting to show them different, and sometimes costlier, travel options than Windows visitors see.

So, just for the sake of argument, I like interesting restaurants with local and organic food, and I don’t mind paying the bit more that those restaurants cost. Am I mad at Yelp if it shows me those on the top of a search, instead of the fast foods and pizza? The Journal adds:

Orbitz found Mac users on average spend $20 to $30 more a night on hotels than their PC counterparts, a significant margin given the site’s average nightly hotel booking is around $100, chief scientist Wai Gen Yee said. Mac users are 40% more likely to book a four- or five-star hotel than PC users, Mr. Yee said, and when Mac and PC users book the same hotel, Mac users tend to stay in more expensive rooms.

Guessing what people want, based on what we know about them, is not a bad thing to do.  And it’s not like Mac users have to pay more for the same room, on the same night, booked at the same time; it’s a matter of guessing what they want to see. How is this bad?

We all routinely pay different prices for the same thing. We all know that airplane seats — to cite one obvious example — are priced in all different ways. It bugs me that I pay more for the trip I book at the last minute than the one I book in advance, but I don’t blame the airlines for that. And we can get last-minute hotel rooms cheaper, sometimes, than by booking in advance. This is pricing by context and value. I don’t like it when it’s me paying more, but then I always have the option of planning better. Or not going. Right?

I’ve been a Mac user since the beginning, and was a long-time consultant to Apple, although I like Windows too and use both. But I’ve always seen the Mac had some extra connotation. That’s interesting to me, and intriguing for marketing purposes. Like car brands, dining preferences, and fashion. We are what we buy.

How do you feel about this? Are you offended?