Interesting juxtaposition: while much of the world worries about where we get real news, and particularly investigative reporting, iPhone users are up in arms about CNN charging less than $2, once, for an iPhone app that includes ads. 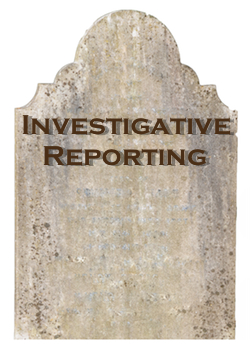 Megan Berry posted Do You Get What You Pay For? yesterday on the Huffington Post:

CNN’s new iPhone app is creating quite a stir. First of all, they’re the first major news site to have a paid app ($1.99). Secondly, they’ve included ads in it. Users are in quite an uproar over this. They wouldn’t pay for something with ads in it!

There’s no doubt that the iPhone world is new and strange. I have an iPhone myself, and I love it; but how did $1.99 for an application end up as expensive? In what world? Maybe I’ve been in software for too long. Megan (disclosure: she’s my daughter) adds:

Yet, what about newspapers, magazines, television, and increasingly games? We constantly pay for media that includes ads, and we don’t even think twice about it.

Meanwhile there’s a lot of real worry about what’s happening to journalism, and especially investigative journalism, as newspapers and magazines fade. Within a click or two of that same CNN-iPhone-related post on Huffington, there’s this post in which Arianna Huffington frets over the debate over online news, another about whether the New York Times should charge for news, and yet another titled What Google Can Do for Journalism. I posted about that here just a couple of months ago.

On The Huffington Post, meanwhile, they took a Quick Poll on how people feel about paying for an iPhone application with advertising in it. Almost half the respondents said no: “If I pay for an app, I shouldn’t have to put up with advertising.”

I’m not saying that iPhone users shouldn’t worry about a couple of dollars, but … no, wait a minute, maybe that is what I’m saying. Skip a cup of coffee, once. Not that I even like CNN, but if nobody can figure out how to pay the reporters, we’re not going to have Journalism. I can imagine a world without newspapers, but a world without Journalism would be a lot worse than that. If saving Journalism (note: not newspapers necessarily, but investigative reporting) takes some ads, I can deal with ads.

So I just bought the CNN application for my iPhone.