Dragon and Treasure and Your Own Business

The dragon guards the treasure. You’ve heard the story since you were a kid, in fables, legends, good and bad movies, and even computer games, such as Diablo and Dark Crystal. It’s there in the back reaches of your mind. Like it or not. 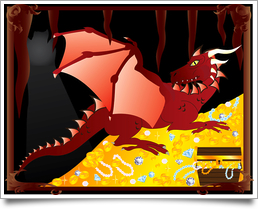 We don’t have to think of this as a story about small business and entrepreneurship, but hey, that works, so why not? And if you’d like to think of it in more general terms, great.

First, you identify your dragon. I think I know mine right now, but it’s different for me than it used to be, and it does you no good to know what mine is, so I’m not sharing. Take a step back from your business, or the business you want to start, and think about what’s bugging you. Think about the stuff you avoid. Maybe it’s fear of failure, maybe it’s jumping too fast, maybe it’s being a boss instead of a leader, maybe it’s not distinguishing urgent from important … it’s probably something you don’t want to think about, but not thinking about it is impossible, like not thinking of a rhinoceros while reading this sentence.  Maybe dragon comes from “drag on the back of your mind.” Your dragon is different from mine. They’re all different.  What’s your dragon?

And what’s the treasure? Is it maybe strategy? A new direction? A clear head, perhaps? A creative leap? And — quite likely — you don’t really know what’s in the treasure until you defeat the dragon. I have only some hints and guesses about what my treasure is, if I manage to slay my dragon and reach it. If we knew what the outcome were, we wouldn’t have to slay the damned dragon. You do it, tough as it is, because you want to open that treasure chest.

Slay your dragon. Claim your treasure.