Does the New York Tech Boom Have Clues for Everywhere Else?

It was Wednesday night, a full auditorium at the 92nd St. Y in Manhattan’s upper East Side. We’d had a meeting in the late afternoon, got tied up, so we arrived late and took the only two seats left, against the wall. Even the balcony was full. The audience was a total mixup of suits, jeans, gray hair, long hair, slightly more young than old, more men than women, but a pretty diverse group. 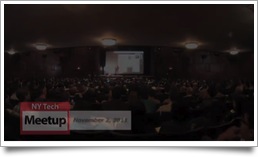 On stage, the winners of a recent New York Hackathon. Hackathon? Yes, a 24-hour competition, producing some great results. One of them, locreep.com, includes a hilarious skit on modern singles scene. The audience loves it.

Soon after we’re looking at Bluefin Labs, a fascinating new venture doing social media analytics of mostly-television trends. This one wasn’t done overnight in a hackathon. It took several years.

All of this was at yesterday’s NY Tech Meetup. Once a month the group comes together for demos, sharing, pitches and presentations. It’s impressive. If you’re interested in watching business pitches, and tech enthusiasm, in action, they have videos of last night’s and info on previous meetings at nytm.org/events/meetups

And that’s just a small glimpse of it, one evening. The hackathons, meetups, educational programs, city programs, investors, startups, and startup juice are bursting out all over. NYU professors getting together with Columbia professors, a city development committee, lots of sponsors, lots of events and opportunities.

You probably already knew about The Silicon Alley tech boom; it’s been covered in the media. But I’m a West Coast guy, with deep roots in the Silicon Valley, so I had this Silicon Valley bias that made it hard for me to see it. And now I do.

This is real. The most recent Business Insider 100 list of top 100 digital startups in the world includes 29 from New York, compared to about 45 or so from Silicon Valley, and just 2-3 each from Chicago, Washington DC, China, Seattle, France, Sweden, etc. And that’s all happened within the last few years. Silicon Valley took a couple of generations. This is time compressed.

All of which reminds me that just last week I received an email from a thoughtful woman bank president from Colorado, asking me for any advice I could offer about generating more startups in her community. That relates to this Silicon Alley phenomenon because here they’ve done it, like nowhere else; and they’ve done it fast. True, New York is a special place, with special advantages. But that was also true 10 and 20 years ago. So what happened here in the last 5-10 years, and how it happened, seems pretty interesting to me. Do you see how it relates to that question in email? And why a lot of people, not just in New York but everywhere else, might care?