Last Saturday I sat in the front seat of a big white van headed from San Miguel de Allende, in Mexico, to the airport in Leon. It was mid morning. We drove through a bright, blue, dry high-desert landscape on a two-lane highway without much traffic. We were in plenty of time for our flight. 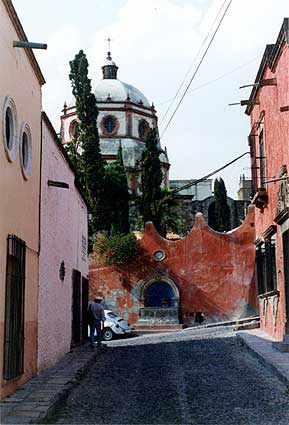 We talked about the economic storm coming. “For us it started just this month,” he said. “We knew it was coming. Now we feel it.”

I spent last week visiting my country-in-law, Mexico, a bright and sunny Christmas-week change from gray and cold Western Oregon, and a nice refresher for me. My wife is from Mexico City, we still have family there, and we lived there through most of the 1970s. Our three oldest kids were born there.

The recession wasn’t really showing up yet. But people pretty much knew it was coming. I talked about it with several people. By chance, the New York Times had a good summary in a story published yesterday, When the U.S. Sneezes, Mexico Catches Cold.

On the surface, at least in San Miguel de Allende, things are still good. This is a small very picturesque town, popular with Americans, about three hours drive north of Mexico City, maybe four hours southwest of Guadalajara. It’s beautiful. Town life revolves around the main square, called either La Plaza or El Zocalo. It was decorated for Christmas and full of people almost all the time. Lots of children. 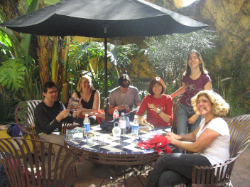 It was particularly good for us because we got almost the whole family together. For a week, we didn’t worry about activities, just which restaurant or where to get stuff to cook, taking pictures, watching the little ones around the pool, walking the cobblestone streets.

Things are tough in Mexico, though. We didn’t see it, but we talked about it with several people, beginning with my in-laws who still live in Mexico City. Believe it or not, when we lived there 30-some years ago it was one of the safer cities in the world, certainly safer than most cities in the U.S. Not any longer. The talk of kidnappings and assaults is everywhere. Lots of people seem to wish the government wasn’t cracking down so much on the drug trade, because that seems to have prompted a very well-trained and committed criminal element to move to kidnappings.

“It’s like stirring up an anthill,” one person I talked to said. “You quickly wish you’d just left them alone.”

On the way to the airport we passed a very large General Motors plant, in Silao, which has been put on extended vacation. Several thousand workers are hoping they open back up after the holidays.

The peso is down against the dollar. Mexico is suddenly cheap. We had a good meal in a good restaurant for 14 people, with a check less than $200. Breakfast at an excellent organic home-grown place, on a deck with a view, ran about $40 for five people. A room for three in a gorgeous bed-and-breakfast was about $150, including breakfast.

A reminder: having an economically healthy Mexico is good for the United States. Good luck with that.