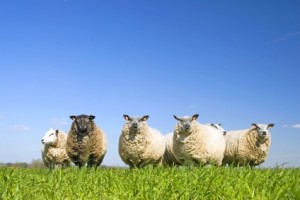 In the good old days – I turned teenager in 1961, and 18 in 1966 – we had a generally accepted process for establishing truth. First, we generally distinguished opinion from fact. Second, when fact was in doubt, we turned to evidence.  And evidence, once presented, was accepted. Evidence ended arguments. But data killed that, politics killed data, and now poets predict politics.

The decline of truth started with data. Huge masses of overwhelming and conflicting data forced us to choose truth from streams of incoherent evidence. For example: Is margarine is good for you? Eggs? Coffee? Those are just three simple cases, regarding food. We have ample streams of evidence on either side. We can find data to support any answer. And those are just easy food and health arguments, not nearly as controversial as, say when ISIS started, who supported what war and when. Evidence doesn’t end the argument because we’re overwhelmed with conflicting evidence.

And then came talking points. First, the overabundance of conflicting data undermined the weight of evidence. After that, political strategists discovered that repetition of well-packaged spin, half truth, and lies could be taken as truth. And now we accept political talking points as truth, even in the face of evidence to the contrary. Millions of people firmly believe absurdities in the face of clear and unambiguous evidence to the contrary.

We’re left with truth in poetry 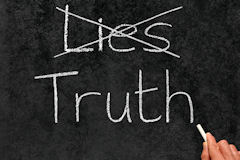 Somewhere around 1790 William Blake wrote The Marriage of Heaven and Hell. That lengthy and sometimes bewildering work includes a section called the proverbs of hell, which includes the following:

Everything possible to be believed is an image of truth

No I’m not suggesting Blake foresaw or forewarned us. But what he says there does fit today’s reality. Right? We’ve got wide ranges of diverse and discordant images of truth. Of course, Blake included that in the section framed as proverbs of hell, not heaven, so maybe he mistrusted its direct meaning. But in the poem, he likes hell, so who knows. I suggest it here as food for thought, nothing more.

And then there is this, written 100 years ago by William Butler Yeats in a short poem called The Second Coming.  It seems disturbingly like what we see around the world today:

Things fall apart; the centre cannot hold;
Mere anarchy is loosed upon the world,
The blood-dimmed tide is loosed, and everywhere
The ceremony of innocence is drowned;
The best lack all conviction, while the worst
Are full of passionate intensity.

That’s towards the opening of the poem. It gets even darker as it closes. Sadly, that too sounds a lot like mainstream politics today. Did you watch that debate on Monday?