Graduating from college and looking for a job, this year of all years, is something like entering a busy freeway going the wrong way. 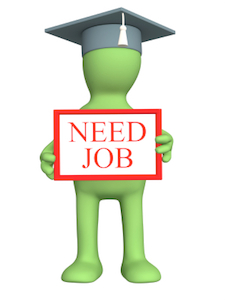 Consider the plight of the kids born mostly in 1988. Struggle through high school, struggle through college, working on the American dream. They were discovering computers during the Internet boom of the 1990s. They did high school in the aftermath of the dot-com bust, and the recession of 2001. Then they went through college in the heyday of the so-called Generation Y boom, helicopter parents, and a rep for being more demanding than any other generation.

There was a hint of special in the way they valued entrepreneurship more than previous generations, or so it seemed. More than before, they started their own businesses. They got a reputation for not liking to do the grunt work, or making compromises.

Then “boom,” as John Madden would put it, as they start their senior years in college, the economy plummets downward.

The job search is harder than it has been in any year since World War II. I’ve been following along with my youngest daughter (previous post here), plus students in my starting a business class. It’s really tough out there. The National Association of Colleges and Employers (NACE) released a survey taken earlier this year showing that less than 20 percent of 2009 grads who applied for a job between February and April actually found one. That compares to 26 percent in 2008, and 73 percent in 2007. 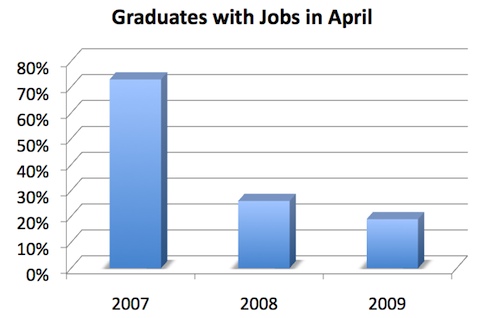 Don’t be confused by the added detail that fewer grads are looking for jobs. The NACE summary points this out:

Surprisingly, despite current economic uncertainties, survey results also show that fewer 2009 graduates have sought out jobs than their predecessors. In fact, just 59 percent of this year’s class has started the job search. Approximately 64 percent of the Class of 2007 and two-thirds of the Class of 2008 had started looking for a job by this time.

I’ve seen what’s going on through the eyes of my youngest daughter, who’s graduating from Stanford this month. She’s got a group of friends who’ve opted to stay on for master’s degrees, not because they wanted to, or at least not that much, but more because they can see what’s going on in the job market and they’d rather wait a year before braving the storm. I know a man, now in his thirties, who complained to his father about the drudgery of the 40-hour work week when he got his first grown-up summer job, after his first year in college. “Don’t worry,” his father said, “it’s only for the next 40 or so years.” But at least he got a job.