I got this business plan question in email:

When you’re starting your business, does “company culture” have an impact in your business plan? Do you start your “culture” when the company is small and create one that will easily expand as your company expands. How important is that type of thing as you go forward (in picking your employees, in the benefits you offer, etc) 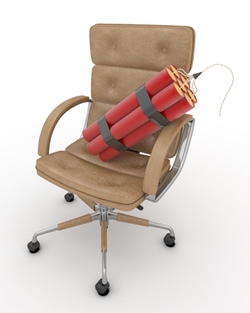 To me company culture is something that exists only when you’re not looking. It comes up a lot in articles and stories about business, but rarely in real life. Consultants see it. It makes some things easier, some harder. It exists,and it sometimes matters, but it’s not something you can grab a hold of.

While it’s important, it’s not something you can plan on and track. As you start a new company, and more so as it grows, company culture will be formed around the decisions you make. As more people come on board, your personal role in culture diminishes, and it ends up being a lot a matter of who you hired.

Company culture isn’t what you say nearly as much as what you do. Who gets the raise or promotion, and why; what happens at the meetings; what values you respect; and group dynamics. You can influence it, but not with plans or promises, just with actions. It’s all those decisions that you make, and, quite often, things as hard to influence as the expression on your face at random times.

The best positive example of company culture I’ve ever heard of was when Eli Halliwell of Jurlique told a group I was in how he built that company around values. It’s focused on natural organic cosmetics. Eli told a Princeton Entrepreneurship Network group that the common bond among his early team members was believing in the importance of the mission. He said that made the company stronger. But he didn’t refer specifically to “company culture.” And he didn’t imply that he’d set out to do that from the beginning. It sounded like he was saying it happened naturally.

I ran into big-time company culture in the 1980s when I was consulting with Apple Computer and the team I worked with established a strategic alliance with Xerox. I traveled with the Apple group to visit Xerox headquarters in Connecticut. The two groups were very different in management style and background, even dress, and the buzzwords and phrases they used. However, it was interesting more for curiosity value than anything else. It didn’t affect the business one way or another.

So it’s there, after a while, but it’s really hard to purposely influence. And I don’t think you do much with it in your planning, simply because it won’t work. It’s a lot like parenting: it’s what you do over the long term in all those collected moments of decision, not what you say. Trying to plan company culture reminds me of coolness as explained by one of my daughters when she was a teenager.

“Dads,” she said “are by definition not cool. And the more you try to be cool, the less you are.”

You may – just a chance, not a certainty – be able to talk about it later, when it’s established. But in your business plan, the most you can do is define the values you think are important. Then try to remember them every day from then on.