Today is Independence Day in the U.S. 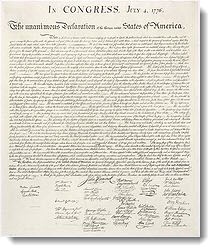 This holiday is all about The Declaration of Independence, which was signed on this day in 1776 by a couple dozen or so very brave people who were prepared to risk their lives for the political freedom they believed in.

They were freedom fighters, fighting for their rights.  They changed the world. They wanted to vote instead of just obey.

The signing was courageous. The document they signed is a very beautiful document, very powerfully written.

We hold these truths to be self-evident…

That’s the core of it. Even the introduction is well written …

When in the Course of human events, it becomes necessary for one people to dissolve the political bands which have connected them with another…

So today we celebrate their courage, their resolve, and their revolution. Here’s hoping that the 300-some million of us that live here today can live up to the idealism and courage they showed back then.