Can Stories be True When They’re False?

So it turns out that Jenny whiteboard quitting was a hoax. The Jet Blue guy with the chute exit and the beer wasn’t. I posted about both of them here Wednesday. 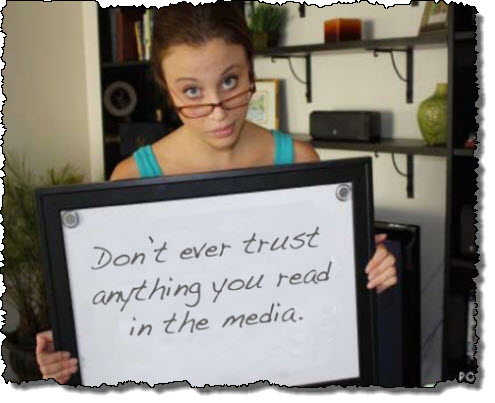 You can read in that post that I suspected Jenny was fiction. I said so then, and I hedged my bets.

The two brothers who run thechive.com contrived the Jenny whiteboard story, hired an actress, scripted it, shot it, and put it on their site as a real thing. TechCrunch has all the details, with more on the actress and the brothers.

The Jet Blue guy, meanwhile, has been charged with a couple of felonies.

The coincidence of Jenny and Jet Blue together is a great example of stories: the power of stories, and the truth of stories.

Anything which is possible to be believed is an image of truth.

All human beings have an innate need to hear and tell stories and to have a story to live by.

So I ask: don’t you think Jenny’s story, although it was contrived, had useful impact?  Wasn’t it contagious media at its best? Doesn’t it have real meaning in business, a lesson about how and how not to treat people, a morality play, with relevant details like the part about the online snooper utility? Isn’t there a golden rule lesson in there?

And what’s the impact of the element of hoax? Did they lie to us, and does that make us angry, and make the story less true? I have no issue with that with Jenny because of the way it was presented. If I’d read it as fact in the  New York Times or Huffington Post I might react differently. We don’t like to be lied to. But if you go back and look at the original, nobody’s really lying there. They are not claiming it’s fact. And maybe I’m not all self righteous about it because I guessed it early and didn’t get burned.

And then there’s the Jet Blue guy: didn’t it strike a chord as well, in about the same way? I noticed CNN had a whole piece on flight attendants venting, which wouldn’t have been news without his spectacular exit. Would this one have been less valid as a hoax? Maybe, right? But this one actually happened.

And those two related flurries of attention: is the one based on story less valid than the one based on fact? There is a journalism element to this combination of stories, I believe. We expect truth, not stories, when it comes from professional journalists. Right? But John and Leo Resig, authors of the Jenny whiteboard story, don’t pretend to be journalists.

My point here: good stories told well communicate a very important variety of truth. That’s true for business and the rest of life too. Even if they aren’t true on the surface, they can be true in a deeper and more important way. Did The Godfather or One Flew Over the Cuckoo’s Nest or Moonstruck have to be documentaries to be true and useful? Are Othello or MacBeth only valid if they’re factually true?

(Image credit: thanks to TechCrunch.)