It’s really important to have an idea of what you need before you start. Continuing with my series on standard business plan financials, startups need to project starting costs. Starting costs set up a starting balance, which is necessary to plan cash flow. And the starting costs are critical to determining whether a startup can bootstrap or needs outside funding. For existing companies that already have financial results, projections start with the expected ending balance of the previous period. But for startups, it’s about starting costs.

Starting costs are essentially the sum of two kinds of spending. You can estimate them both in two simple lists:

I’ve used a bicycle store as an example in several posts that are part of this series of standard business plan financials. Here’s a visual in spreadsheet form, of sample starting costs for a hypothetical bicycle store. 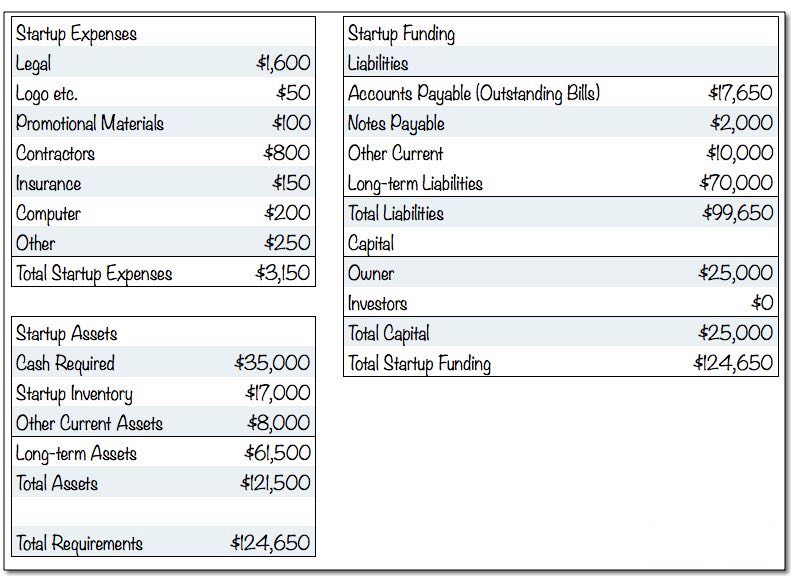 Notice that the lists for estimating starting costs, on the left in the illustration above, are matched to another list of starting funding, on the right side of the illustration. Books have to balance, so the initial estimates need to include not just the money you spend, but also where it comes from. In the case above, Garrett had to find $124,500, and you can see that he financed it with Accounts Payable, debt, and investment in various categories.

Here is another simple example: the starting costs worksheet that Magda developed for the restaurant I used for a sample sales forecast. Magda’s list includes rent and payroll, the same as in her monthly spending, but here they are included in starting costs because these expenses happen before the launch. 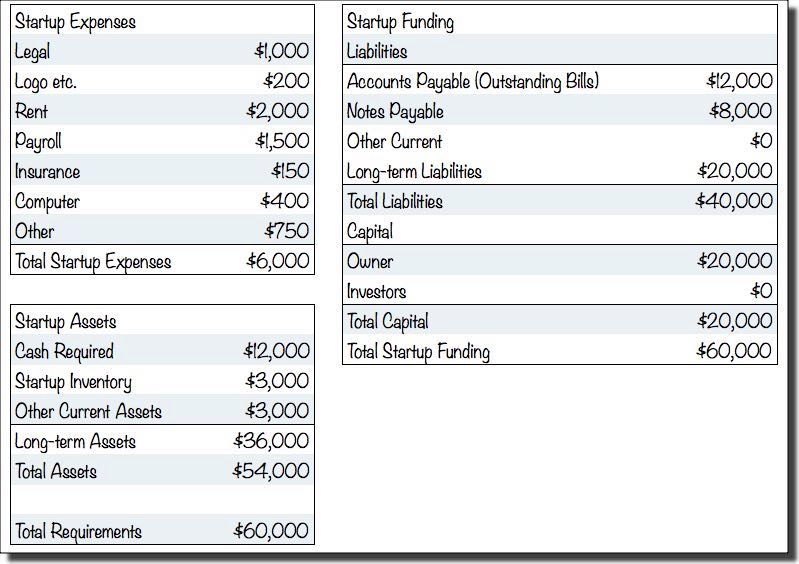 I included rent and payroll because they point out the importance in timing. The difference between these as startup expenses and running expenses is timing, and nothing else. Magda could have chosen to plan startup expenses as a running worksheet on expenses, starting a few months before launch, as in the illustration below. The launch in this case is early January, so the expenses for October through December are startup expenses. I prefer the separate lists, because I like the way the two lists create an estimate of starting costs. But that’s an option. 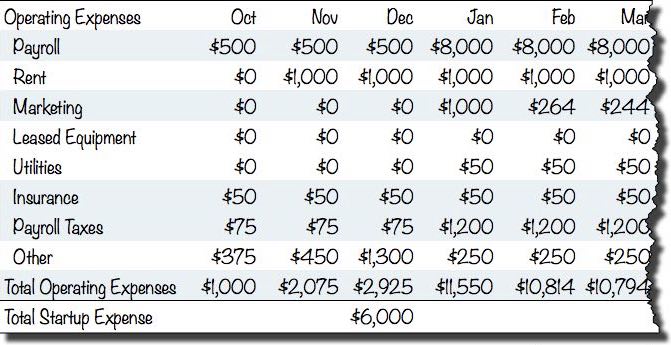 If you’re a LivePlan user, the LivePlan interface assumes this method and has a more intuitive interface than the spreadsheet version I’m showing in this post. For LivePlan, you start your plan when you start spending, regardless of launch date. So the spending you do for rent and salaries and such, before launch, is part of the flow, as above. Also, LivePlan has its own guided way of helping you figure out what assets you need, how much they cost, and how you are going to finance starting costs, to set up your balance. And the LivePlan cash flow estimator will help you decide how much cash you need, so you don’t have to follow the spreadsheet method here (below).

How to Estimate Your Starting Costs

Obviously the goal with starting costs isn’t just to track them, but to estimate them ahead of time so you have a better idea, before you start a new business, of what the financial costs might be. Breaking the items down into a practical list makes the educated guess a lot easier. Ideally, you know the business you want to start, you are already familiar with the industry, so you can do a useful estimate for most of the startup costs from your own experience. If you don’t have enough firsthand knowledge, then you should be talking to people who do. For others, such as insurance, legal costs, or graphic design for logos, call some providers or brokers, and talk to partners; educate those guesses.

Starting Cash is the Hardest and Most Important

How much cash do you need in the bank, as you launch? That’s usually the toughest starting cost question. It’s also prone to misinformation, such as those alleged rules of thumb you can find everywhere, saying you need to have a year’s worth of expenses, or six months’ worth, before you start. It’s not that simple. For most businesses, the startup cash isn’t a matter of what’s ideal, or what some expert says is the rule of thumb – it’s how much money you have, can get, and are willing to risk.

The best way is to do a Projected Cash Flow while leaving the supposed starting cash balance at zero, which shows how much (at least in theory, according to assumptions) the startup really needs in cash to support the business as it grows, before it reaches a monthly cash flow break-even point. Magda did that to determine the $12,000 needed as starting cash for her restaurant. Note how, in the illustration here, the lowest point in cash is slightly less than $12,000:

That low point comes, theoretically, in the third month of the business, March. The low point is $11,609. Obviously that’s just an educated guess, but it’s based on assumptions for sales forecast, expense budget, and important cash flow factors including sales on account and purchasing inventory. So it’s better than a stab in the dark, or some rule of thumb. Just as an example, the total spending with the estimates shown here, the theoretical “year’s worth of spending,” is $182,000 (which you don’t see on the illustration, by the way, but take my word for it). The total for the first six months is $93,000. If Magda sticks to those old formulas, she can’t start the business. She is able to raise enough money, between loans and her savings, to put $12,000 into the starting cash balance. So that’s what she does. Then she launches and continues to have her monthly reviews, and watch the performance of all key indicators very carefully.