For a good time take a look at the answers to this question on Quora: What are some classic examples of a founder letting his or her ego get in the way of making the right decision for a company? 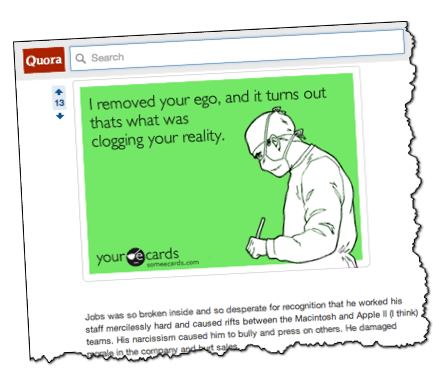 Now yes, that’s one stellar example of a loaded question. But — loaded or not — it’s attracted some very interesting answers. It makes for good business reading, for sure.

We tried this before … We failed. Miserably. … our sales staff, followed by myself, along with the other partner all advised against the move … Then, all of the sudden, two months later, he made some executive vote to change everything overnight.  … Our revenue streams dropped immediately.
I stressed for months on end, … but he didn’t listen.
He just made the move, and everyone eventually lost their jobs.

That’s a small piece of a long answer, and I’ve clipped it significantly. It makes a good story and good reading. That answer goes on with some other examples too, which makes me wonder. Maybe its biased and just sour grapes.

Another interesting quote from another answer:

The thing with egos is they cause a distortion of reality which means they’re either too fragile to accept the truth (self-esteem) or they’re so starved for attention that their bullying gets in the way of real progress (narcissism). … Jobs was so broken inside and so desperate for recognition that he worked his staff mercilessly hard and caused rifts between the Macintosh and Apple II (I think) teams. His narcissism caused him to bully and press on others. He damaged morale in the company and hurt sales.

Maybe these are twisted answers from people bitter about things having gone wrong. Maybe they are exaggerated. But regardless of historical accuracy, every business owner should read through these. And I write that as a business owner.