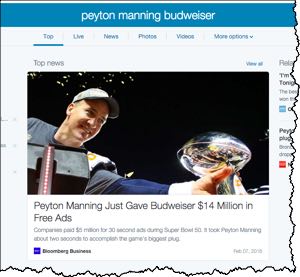 In the stadium, on the field, confetti everywhere, the Super Bowl is over, the winners celebrate. Team, journalists, and celebrities surround the star quarterback, 39 years old, whose team has won. This is the perfect end to a stellar career in pro sports. He has millions of eyes on him as he says: “I’m going to drink a lot of Budweiser tonight.”

Welcome to 2016. The like and follow and  threatens old-style advertising. Big brands have big budgets, but we buy what our online friends tell us too. And the quarterback, so the big brand hopes, is our friend. And the Peyton Manning’s beer call sparked a storm of social media. And maybe business lessons learned. Search the web or any social media platform for #manning #budweiser and you’ll see.

It’s not that different from 29 years ago when that Super Bowl’s winning quarterback said “I’m going to Disney World” in exactly the same situation. Phil Simms, that quarterback, said Disney paid him $50,000 to say it. Of course there was no storm of social media back then. And, according to Wikipedia, other sport stars who did the same as Simms at championship moments included Joe Montana, Tom Brady, Magic Johnson, Kareem Abdul-Jabbar, and along list of others. The Disney World remarks continued through last year’s Super Bowl, when New England Patriot stars Malcolm Butler and Julian Edelman both did it. The U.S. women’s soccer team did it in 1999. Ellen DeGeneres’ television character did it in the 1997 TV episode when she came out as lesbian.

So what? Sure, there’s the obvious problem with plugging beer in that situation. Last I looked, drinking “a lot of” beer rarely correlates with success on any playing field.

It’s also a marker of change. Big brands struggle as ads become less effective because of blocking, fast forwarding, or just plain ignoring them. And opinions published in social media swirl and engulf celebrity and business personas these days.

My conclusion, for startups and small business: It’s a reminder. You can’t ask for the close so quickly anymore. Nobody gets fooled. Peyton Manning may or may not have made some big bucks with that comment (there are lots of competing facts about how much), but his brand suffered. You and I don’t have the opportunity and spotlight he had last night, but we do have our equivalents, here and there. Don’t blow it with anything that obvious. People see through it.  They might ding you in amplified word of mouth. Or, maybe worse, they will probably just ignore you.