Funny coincidence: “mission” the way we use it in business, and “mission” the way the Spanish priests used it to build colonial California. In both cases, it’s foundations. As the Spanish settled California, the conquistadores who explored were followed by clerics who built missions and invited the neighboring Indians to join them in creating farms, towns, and schools around the missions.

Last year I heard Eli Halliwell, CEO of Jurlique, talk about how much extra momentum he got as he worked with that company by building a team based on a shared mission. Jurlique is about natural, healthy cosmetics.

What reminded me of that was Seth Godin’s post In search of dolphin leather:

“Having a community-based quest means that there’s less room for whining, for infighting and for dissolution. Having a mission not only points everyone in the same direction, it also creates motion. And motion in any direction is often better than no motion at all.” 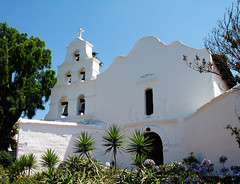 And although Jurlique comes to mind because Eli made his point very eloquently, you and I know companies like that, driven by missions. People can believe in a mission. It gives the team power and momentum. People are happier when they work on something they believe does some good to somebody.