I was happily reading Sramana Mitra’s The Other 99% of Entrepreneurs on Read/Write Web, agreeing with every detail, when I ran into a snag. It’s in italics in this quote from Sramana’s post. 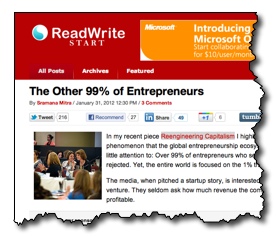 Over 99% of entrepreneurs who seek funding get rejected. Yet, the entire world is focused on the 1% that is “fundable.”
The media, when pitched a startup story, is interested in who funded the venture. They seldom ask how much revenue the company has or if it is profitable. Incubators take pride in how exclusive they are and how many “deals” they “reject.” Angels and VCs, of course, discard most of their “deal flow.”And entrepreneurs? They seem to have confused the definition of entrepreneurship altogether. Entrepreneurship, they mistakenly believe, equals financing!

I agree with her: It is wrong — except for that one extra detail. On the core of it, well, I posted something similar more than three years ago, in a respectful hats off to bootstrapping, on this same subject:

For years now, I’ve complained every so often about how we (in blogs, business plan contests, academia and entrepreneurship in general) tend to idealize the venture capital-financed startup, the SBA loan and the more formalized and carefully planned financial strategy. This is especially true in venture competitions.

This is the real world. Bootstrapping is often the only way to start, build and grow your business.

But don’t blame the investors. That’s like blaming up for down. Angel investors spent about $18 billion last year to fund more than 50,000 startups; of course they have to pick and choose. That’s the nature of investing in startups. And venture capitalists are investing other people’s money. They’re being paid to generate a return on investment. Their job is picking the best deals they can find. It’s for the rest of us to understand and respect bootstrapping.

Sramana Mitra is way too smart for that. I like her work and read her often, and included her in posts on this blog. I think she just got on a roll and added one detail too many. Because everything else in that post makes a lot of sense. And she’s one of the best writers/bloggers/thinkers you can find on startups and investment in general. I love her reengineering capitalism idea. So consider this a small correction for a really good post. On an important subject.