Oh dear, there it is again: somebody else pushing data over common sense. Paul B. Brown, on Forbes.com, writes: 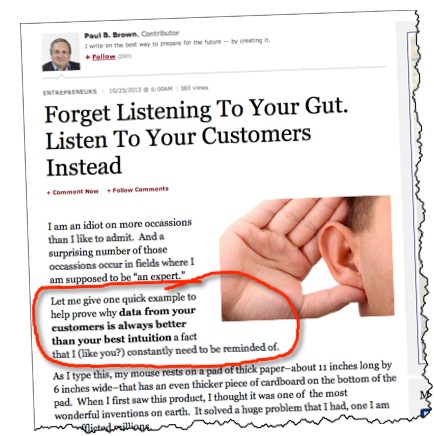 data from your customers is always better than your best intuition.

Wait, what? Did he really say that?

Not that Steve Jobs was right on everything, but I can’t resist my favorite Jobs quote here:

It’s not the customers’ job to know what they want.

Paul Brown tells a story of a mouse pad combined with paper that he thought was a great idea, he bought, he used, and he didn’t like. He suggests that asking customers would have been better than guessing.

Talking to customers, sure; great. Data from customers? Not so much.

My problem is that so-called “data from customers” is rarely truth. Data gathering is plagued with problems of research design, random lists, skewed questions, half truth and innuendo disguised as data. If it were really good data, the real result of actually talking to customers, that would be pretty good. But seriously, how often are customer polls and primary research really valid? Seldom.

And ironically, his story argues for using the darn thing, not polling potential customers. He says he liked the idea until he actually used it. I think that’s a clue. No?

My career has been software, and I can tell you this: The best software comes from people who use what they create. Not from customer data.

The problem with thinking like this is that then data ends discussion and trumps common sense. Which would be okay, most of the time, if so-called data were truth. But it rarely is.

One response to “Bad Advice on Data Decisions”