Picture yourself in front of a group of 20-30 business owners. They are computer or software resellers, dealers of Progress Software, Autodesk, SolidWorks, or a personal computer manufacturer. They are mostly men in their 40s and 50s. Most of them have been in business for themselves for 10-20 years. Most of them have three or more employees, a few have 25, 50, and one or two 100.

If you ask this group how many of them regularly review their business plans and revise them as needed, roughly 10% of them will raise their hands.

You want actual data, numbers, and better yet, names? Yeah, me too. I wish I’d done that but it was enough to run full-day planning seminars, each one took a lot of energy, and there just wasn’t enough bandwidth for me to be managing the seminars and populating a database at the same time.

What I will give you, though, is accumulated experience. When I run one of these seminars I can count on my 10% number enough to take the risk of setting myself up in front of the group, at the beginning of the day, with those people as leaders. Throughout the day I can call on them confidently for comments and details and anecdotes, and they’ll have the right kind of useful responses.

These people are my stars. They don’t all plan the same way, they don’t all have the same process, but they do have process. I can count on them. They get it. 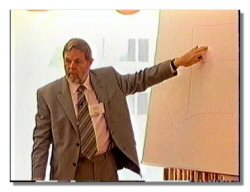 Here’s a concrete example: during part of the seminar I want to illustrate the paradoxes of planning, say “business plans are always wrong.” I have my two or three stars in the room and I can be sure of getting a useful response from one of them when I deal with this issue for the group. I’ll ask, “Ralph, Mabel, Mary … what do you say? Why do I say that?” And I’ll get back a response about how they’re wrong because assumptions change, which is why plans need to be kept alive and managed. Or they’ll say something like that.

I don’t like to blithely take risks when I’m in front of a group. This 10% rule, however, has worked consistently for me for years. Now, I realize having a set of numbers to display would be stronger than my anecdotal evidence, but then, so many sets of numbers are flawed anyhow, and give the wrong impression. My people in the seminar aren’t a random sample by any means, so the numbers wouldn’t be statistically valid anyhow.

So who are these people? Starting in the 1980s I did some seminars for Apple Computer dealers in Latin America, and then in the 90s in Japan and Singapore, then HP dealers in different places, then Data General, UNISYS, and more recently for dealers of Autodesk, SolidWorks, and Progress Software.

Does this same 10% apply for other industries? I can’t be sure that my anecdotal data applies; but I’ll bet it does.