Be True to Your Home Office Self

There was a television commercial a while back in which a supposed small business owner answers the phone with different voices. “Customer service?” in one voice. “I’ll connect you to shipping.” Then “this is shipping” in another voice. And so on.

This comes up here because of the New York Times piece called Headquarters at Home and Proud to Be There about home offices that don’t pretend they aren’t home offices. That reminded me of those old days, and my business startup in my home office.

My company has 40 employees now, but I started it in a home office in a three-bedroom house by the commuter tracks in Palo Alto. We were really broke after two years of business school relatively (I was 33) late in life, and we had four kids. Creative financing was required (equity sharing). 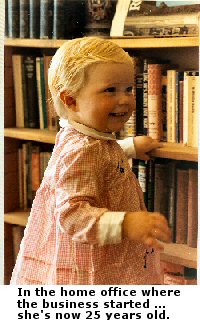 We had the four children in one bedroom in two bunk beds, we parents in another bedroom, and my home office in the third. It included a computer I’d built myself, as big as a small refrigerator, plus desk and bookcase, a very early Apple II, and a disconnected keyboard for our youngest  daughter (at the time — she has a younger sister born later).

Those are very good memories. My then-youngest daughter and I spent a lot of time in that office. She learned early that as long as she was quiet she was always welcome. She would color on the floor sometimes, sit beside me and pretend to type, and she liked to sit on my lap during long phone calls, taking advantage of the lull in the typing. I would use my finger to tell her to be quiet, and her eyes would twinkle with the joke between us, as she climbed into my lap and stayed quiet.

Home offices weren’t as trendy back then as they are now, but I did hang around with some others working out of home offices, and the rule was not to hide it. Generally, it seemed like bad business to hide that you were in a home office because it was too easy to get caught. Pretend you’re something you’re not and you look like an idiot when it comes out. What if the dog barks or a child cries while you’re pretending to be downtown. I think it’s interesting that the New York Times makes an issue of it with the “headquarters and proud of it” theme, because it’s just common sense.

I don’t think anybody would seriously advocate for pretending to be different than you are. There are advantages to the home office situation. My best-ever consulting client, who hired me for repeat business pretty steadily over 12 years, used to say that he liked working with one-person consultants because he knew who was doing the work. And the home office went right along with that.

So now we occupy the second floor of a local bank building, with a fairly standard office space full of the same kind of cubicles that Dilbert lives in.  The home office became impractical as soon as the business needed to take on employees, so I moved out to a small office about a mile away. Even then, however, we still did a lot of work at home and some of the disk assembly chores in the early days of Palo Alto Software were done by a family with a lot of kids spending weekend mornings with piles of plastic floppy disks and sticky software labels saying “Business Plan Toolkit.”

Is there a lesson here? I think so. I think you have to be yourself in business, as in the rest of your life. It’s a lot harder trying to be somebody else.