Do We Have Any Idea What Productivity Really Is?

I think it’s a concept that grew up with the industrial revolution. Productivity was measured as factory work, in units produced per hour. Visualize finished cars flowing out of the assembly line. 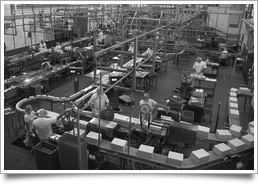 What’s productivity today and how can we measure it? The modern work style is so diffuse, now. Who knows what makes us productive. Emails, perhaps, or phone calls or tweets or blog posts? Presentations? What about lines of code, by the developers.

I posted tell the truth: where are you most productive last week, questioning how people answer to surveys on where they are most productive. last week on whether people are more productive at home, office, or coworking sites.

Later I saw Four Destructive Myths Most Companies Still Live By on the Harvard Business Review, by Tony Schwartz. These myths are also about productivity. I really enjoyed his myth number two:

Myth #2: A little bit of anxiety helps us perform better.

Which he tears apart elegantly with this:

The more anxious we feel, the less clearly and imaginatively we think, and the more reactive and impulsive we become.

But my favorite of Tony Schwartz’ myths is his number four:

Myth #4: The best way to get more work done is to work longer hours.

No single myth is more destructive to employers and employees than this one. The reason is that we’re not designed to operate like computers — at high speeds, continuously, for long periods of time.

Instead, human beings are designed to pulse intermittently between spending and renewing energy. Great performers — and enlightened leaders — recognize that it’s not the number of hours people work that determines the value they create, but rather the energy they bring to whatever hours they work.

As technology changes the world, physical presence is no longer the same as work presence. I can be sitting at a desk in my office and miles away, and that’s much, much easier now than it used to be. So how do we measure productivity?

I think we have to look for results. Numerical results. Measure productivity by outcome, not input. But I’m not sure. What do you think?