Angels vs. VCs on Business Pitches

Over the weekend I caught Business Insider’s Five VCs Explain What They REALLY Think About Your Pitches. It’s a great post, gathering points together from discussions with several high-end VCs. If you’re looking at venture capital, read it. 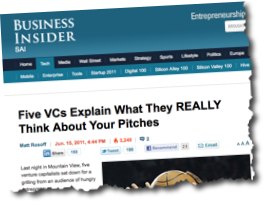 Part of what they said reminded me that angel investors and VCs have a lot in common. For example, these important points:

I’m pretty sure all of the 30+ investors in my local angel investor group would agree with every one of those. I particularly like the three about answering questions, telling stories, and not to forget the financial info. Those three are critical.

Some of the other points, however, remind me of the differences between VCs and angels. For example, the VCs say introductions matter:

The person introducing the entrepreneur is a big deal — if [the VC quoted] doesn’t trust the referral, he won’t even take the meeting.

Our group, in contrast to this, looks into every submission we get. Introductions aren’t required. Some of them don’t get past a quick read of the executive summary, but I think most angel groups are similar. We’re going to read the executive summaries, at the very least. And we invite submissions. Every plan submitted before March 31 is considered for our May investment. Some are not considered very long — like less than five minutes — but still. Introductions don’t matter. The plan does.

Two other points probably depend on the group, the particular angel investor, and the moment. The VCs said:

I don’t think those points are as true for angels as for VCs.VCs are investing other people’s money, mostly institutional money, and they’re paid to do that well. Professionally. Angels, on the other hand, are investing their own money. Maybe that makes a difference. It does to me. Angels invest smaller amounts, generally, and at an earlier stage, generally. Maybe that’s why sometimes we’ll consider a not-so-big deal, and sometimes saving the world, or not, makes a favorable difference.