On Fred Wilson’s 10 Ways to Start a Business 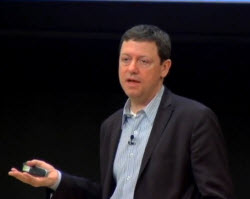 Hooray for Fred Wilson, a VC (Union Ventures) with a blog named A VC, for this brilliant 20-minute talk called 10 Ways to Be Your Own Boss, posted on his blog as online video. Fred calmly and carefully blows apart the way-too-common assumption that starting a business is about finding investors. He does this with a simple list of examples, each of which is a happy healthy business, most of which started and grew without outside investment.

He begins this talk with a couple of absolutely great quotes. The first, from a comment on Fred’s blog:

The second, from a tweet, shown here on the right, highlighting addiction to a monthly salary.

What I really love is the point he makes with the list. All 10 of these start-your-business instances seems perfectly understandable.

That’s just 10, he says, and he limited his list to 10 only because he had only 20 minutes. He implied he could have gone a lot longer.

The point, made very powerfully in a delightfully cumulative way, is that only two of these 10 raised outside investment money. And one of those two got well on its way first, with people working for free, believing that the future would repay them.

One small detail that bugs me here is the “be your own boss” description of starting a business. I decided to put that into the 140-character tweet format as I was writing this. Here it is: