A True-Story Reminder About Pricing In Consulting

True story: back in my business planning consulting days, 1983-1994, Apple computer was by far my best client. I worked for the Latin America group, then Apple Pacific, then Apple Japan, and a bit for Apple USA and Apple Europe. I facilitated a lot of business plans, and did market research and some country plans, single-issue plans, and so on. I also worked with other clients, of course; but I depended on Apple. 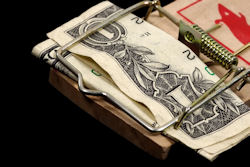 I priced my consulting by the engagement. The client would describe the job, I’d write a proposal, set a pricing and billing schedule, and then stick with it.

There was one person, among several dozens I worked for, who had a pattern of scope creep: meaning that after we’d agree on what was to be done for how much money, as I delivered the work in stages, he’d consistently want more than what had been agreed. It was always “But what about this” and “have you followed up on that?”

And it’s hard, as you know if you’re in this kind of expert business, to tell the client too often that what he or she is asking for is beyond the scope of the project. Sure, you have to sometimes, but it’s never easy.

So here’s my nugget about pricing: after I worked with that person and had that happen once, I was concerned with the problem. The second time he asked for a job, I wrote the proposal much more carefully, trying to block out scope creep; but it happened anyhow. The third time he asked, I calculated what I would normally charge, and tripled it.

That pricing idea worked. I didn’t want to have an enemy embedded among my favorite clients. So he didn’t accept that proposal, and I didn’t do any more work with him after that. But we remained on good terms at meetings, and he didn’t lobby against me when my name came up.

The worst I heard he said about me, second hand, was “how can you guys work with him so much? He’s really expensive.” And that was fine with me.

4 responses to “A True-Story Reminder About Pricing In Consulting”