Today’s New York Times reports Fidel Castro Resigns as Cuba’s President. So today I’m regretting the aging process, his loss, and Cuba’s loss (more for what might have been than what is or was) and remembering my brief encounter with Castro and Cuba 30 years ago.

I wasn’t alone with Fidel. But it was just me and about 100 other people with Fidel. He gave a three-hour meeting with 75 or so executives of international companies, as the highlight of what Business International called an Executive Roundtable. Sugar prices had skyrocketed that year, so suddenly Cuba had hard currency to spend. I was there as staff, listening. I was 29 years old. I’d been in Cuba about six weeks, preparing the advance economic study for the international execs. I’d arrived there from Mexico City, where I lived, expecting to find mecca. Or maybe paradise. I was a product of the 1960s. I was also fluent in Spanish.

Fidel Castro was a showman, a performer, extremely charismatic. He held his audience of  mostly high-powered executives of major international companies spellbound. He was side-splitting funny  — I mean stand-up comedian level funny — at times, always warm, always sincere, but also quick to rise up in anger and become dramatic, but then he would spin back again to funny, and warm again, and back and forth and up and down while I and the rest of the group rose and fell with his every word. 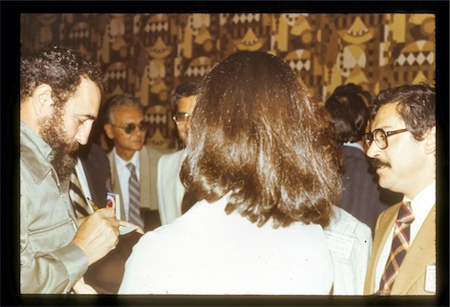 Talk about charm: he had us all at hello and kept us until goodbye, literally three hours later, followed by a cocktail and handshaking and photo event. The photo here is one I took of that event .

This was in 1977. I was living in Mexico City, working on salary with Business International, and writing as well for McGraw-Hill World News, meaning Business Week and other magazines. Business International sent me to Cuba for a month to work on the documentation for the international business roundtable, which they eventually published as a book.

That visit refined my somewhat naive political views. I went to Cuba expecting to love it. I’d been a hippy and a leftist and got into journalism at least in part because of the idea that I’d (see, I said naive) change the world. Of course I learned that all I was really doing was filling space between the ads, but that’s a different story.

For a long-haired liberal in his late twenties, there were a few things to love about Cuba in the 1970s. For example, if you were going to be poor and living in Latin America, you wanted to live in Cuba. You’d get decent housing, medical care, and schooling for kids like nowhere else in the region. And there was also the music, the beaches, and for me, then, the fact that I was a 29-year-old American journalist getting paid to study business in Cuba for about six weeks.

However, by the time I left, I couldn’t wait to get out. That was a big surprise to me, and a big lesson in the difference between ideals and actual living in the place. I left Havana on a night flight. Waiting to get on that plane was like waiting to escape something as dark and quietly worrisome as the night.

Does that sound too dramatic? Maybe it comes out that way because I was shocked. I had expected to love Cuba. Instead, I ended up with a newfound appreciation for freedom and free enterprise and the possibility of entrepreneurship.

The allure left slowly but steadily, like air coming out of a tire with a small puncture, over a period of several weeks. It was great in the beginning. I was put up in a very nice hotel and set up to work with two other Americans and three Cubans. Of the Cubans, one was an economist, one a tour guide, and one a general assistant. We got to know them. We worked with them everyday. We had coffee with them in the morning, and lunch with them at midday, and the occasional beer with them after dinner.

But I developed a claustrophobia of the mind. I liked these people we worked with. And with time I realized that they were spouting slogans and phrases to each other — for example the ubiquitous “companero,” meaning “comrade” — because that was important. Of course they were watching us, and that was off-putting but expected, but when I realized they were also watching each other, and spouting slogans as a protection, that gave me that special intellectual claustrophobia. It made me think how much it meant that I could be on salary with Business International and work on my own time with other publications, without a government interfering. That I could quit and open a travel agency if I wanted. My companeros, on the other hand, were assigned a career. One was the economist, and one was the tour guide, and neither could choose to change. And the worst part of it was that success was clearly related to spouting slogans, not necessarily to competence and performance, and major life changes were not easy options — not that starting a business is easy in the U.S. or Mexico, but at least it’s a possibility, while in Cuba, when I was there in 1977, it wasn’t.

I remembered a detail I’d forgotten. In 1971 I covered Salvador Allende of Chile during a state visit to Mexico. Allende was another great man, a poet in statesman’s garb. In one of those sideline in-the-hotel-bar off moments, sitting on bar stools, one of Allende’s advisors told me, off the record, “Castro’s people told him he had to kill about 500 guys to stay in power, but he won’t, he’s too good.” That was six months before Allende was overthrown and killed by a right-wing CIA-sponsored coup, ending what had been Latin America’s longest constitutional democracy.

Fidel, however, was like a human magnet. Everybody hung on his every word, not because we had to, not because it was good business, but because he was the kind of leader that attracted attention and admiration. His warmth, his sense of humor, his dedication to ideals, all of that made his personal power obvious. In his presence, it seemed only reasonable that an entire nation could depend on his one-man rule. Even though it was easy to see that Cuba wasn’t working, it was also easy to believe it wasn’t because it didn’t have a great leader. To this day I’m convinced that Fidel would have risen to power almost anywhere. His ideals weren’t working, and Cuba wasn’t working, but Fidel Castro was.

I talked about this later with General (that was his given name, not his title or position) Fatjo, head of the Latin America group of Business International, a Cuban, and at one point assistant director of economic studies under the Castro government.

General once told me of his time as a college student believing in the Cuban revolution because the previous government was so corrupt, and then his year inside the Castro government, and his eventual realization “that Castro had been a communist from the beginning.” When General told the story, it was fun. But it wasn’t fun for him getting to the United States, and he died a few years later, still wishing he could have his country back. He was a Miami Cuban.

I said above that Cuba was the best place in Latin America to be poor. It was also the worst place to be not poor, or educated, or entrepreneurial. That’s why General, and most of the educated people in Cuba, left quickly for Miami. And Cuba missed them.

By the time I left on that night flight back to Mexico, I was pretty mixed up. Castro is clearly a great man, but perhaps he was not in the right place at the right time. During the 1960s we used to think U.S. policy had pushed him to the extreme left because it left him nowhere else to go. But my friend General was right in the middle of economic studies for his government, and he insisted until he died that Castro had fooled him and all of his college liberal friends, because Castro had always been hard-core communist, not just freedom fighter.

Thirty years later, I’m grateful to have seen him live and in person. And I’m not that surprised that he lasted so long. I’m still mixed up on this. So many different views are believable.

(Note: this is now a changed version from what I posted here about three hours ago. That first one had an apology for needing more structure. This one is the version I posted about half an hour ago on the Huffington Post. If this looks weird in the RSS feed, I’m sorry. I couldn’t help it.  Tim)