A New Dimension of Haves and Have-Nots

Wow. Talk about misreading data. They found clusters of autism and looked for pollution or some such problem as a cause, but found something entirely different, and probably just as significant. You have to read this, on NPR: Autism ‘Clusters’ Linked To Parents’ Education. It turns out that… 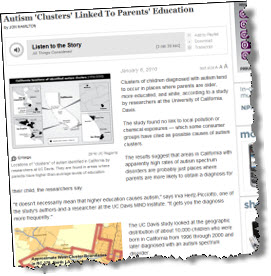 Clusters of children diagnosed with autism tend to occur in places where parents are older, more educated, and white, according to a study by researchers at the University of California, Davis.

The study found no link to local pollution or chemical exposures — which some consumer groups have cited as possible causes of autism clusters.

The results suggest that areas in California with apparently high rates of autism spectrum disorders are probably just places where parents are more likely to obtain a diagnosis for their child, the researchers say.”

I grew up with a sense, inherited from my mother, of the danger of dividing the world into haves and have-nots. It’s not just a matter of fairness. Even the haves are worse off when surrounded by large numbers of have-nots. Nobody wins. This was just a bad vision when I was growing up, but it’s an undeniable reality now.

And now it’s affecting things like drugs to increase focus and intellectual achievement?

Shades of The Child Buyer, a strange novel from 1960, by John Hershey. Large corporations were buying children to convert them into something like biological computers.

I picked this up from Steve King of Small Business Labs, who posted on it here yesterday. He takes it a logical step forward, noting that drugs like Ritalin, supposedly for helping ADD, are now widely used by students looking for an edge. He wrote:

This is an early sign of the coming human enhancement divide.  Simply put, rich people are going to have better access to technologies and drugs that improve cognitive ability and other forms of human enhancement than poor people.  The same will be true for rich countries versus poor countries.

He says this scares him. Me too.

2 responses to “A New Dimension of Haves and Have-Nots”