Talk about letters of resignation! Burning bridges? Well, maybe one of these bridges needed burning. Still, maybe we need to review the 1950s blockbuster movie The Bridge on the River Kwai, on the merit of burning bridges. There is job satisfaction, and end-of-job satisfaction.

There are two great quitting stories in today’s news (or maybe just quasi news) as I write this. First, the girl with the white board quits spectacularly well, an amazing piece of work (fiction or not). Second, the Jet Blue flight attendant who fought with a passenger, cursed all the passengers on the PA system, grabbed a beer, and exited via the emergency chute. Stories like these just have to be told. 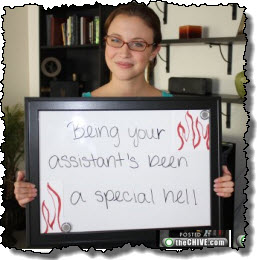 If you haven’t seen the girl with the white board, take a minute, click the link, and see it.  Have you seen the movie Love Actually? Do you remember the scene in which the guy stands at the door with written messages for the girl? It’s like that, but (if it’s real) different, maybe even better (but only if she ends up with a better job). As I write this I don’t know for sure whether it’s staged or not. I kind of hope it’s fiction, because if not, then she’s had a miserable time and he deserves to be dragged in the muck. But it could be a well-staged hoax. Here’s a link to part of that discussion.

After a dispute with a passenger who stood to fetch luggage too soon on a full flight just in from Pittsburgh, Mr. Slater, 38 and a career flight attendant, got on the public-address intercom and let loose a string of invective.

Then, the authorities said, he pulled the lever that activates the emergency-evacuation chute and slid down, making a dramatic exit not only from the plane but, one imagines, also from his airline career.

On his way out the door, he paused to grab a beer from the beverage cart. Then he ran to the employee parking lot and drove off, the authorities said.

Another Web story said what the NYTimes called “a string of invective” including telling the individual passenger to f*** off, and then, microphone in hand, over the PA system, telling all of the passengers the same thing. Then the beer, and the exit chute.

And the third story is one of my own, from way back when I was on the night desk at United Press International (UPI) in Mexico City. This was in the early 1970s. We communicated via the same teletype machines we used to send the news. The rumor, or company legend, was the guy in some Midwest bureau who walked off the job after sending the following as his last transmission to the wire: “too much work, too little money.”

Which brings me back to the theme of burning bridges. I’ve always believed that you should never ever burn bridges when you leave a job. My advice is never to complain about your last job when looking for a new job. It just sounds bad.

Still, in the case of Jenny with the whiteboard, and what she describes as her work situation there, I think that could be the exception that proves the rule. And, furthermore, she’s done it so spectacularly well that I expect she’ll get a lot of much better job offers as a result. That’s already coming up in the comments to her pictures where they were posted on thechive.com.

And the UPI story? Rumor has it he had another job waiting. So he got some end-of-job satisfaction, for sure.

But with the Jet Blue story, he did get some fame out of it, including his name and picture in national media; but he also got criminal charges, and I think we pretty much call that a bridge burned. Or dynamited, perhaps, like the one over the River Kwai.  Maybe he’ll get on reality television?

(Image: a screen shot from theChive.com. Click it for the original.)