Pictures, words, ideas. If one picture equals 1,000 words, how many ideas does it generate? Is there a transitive property there? I had time over the weekend to pick up two unrelated pictures. Each covers something entirely different. Both are full of ideas.

The first, a chart by Seth Godin:

This is one of those things that must have been hard to come up with, but makes sense when you look at it. A map of communication. On the horizontal axis of the chart, from book on one end to a conversation at the other. With a book, the writer writes it at one point in time and the reader reads it at an entirely different time. With the telephone and coaching, both parties of the communication, sender and receiver, are involved at the same time. On the chart’s vertical axis, how much bandwidth is involved, from mail and graffiti at the low extreme, to movies and coaching at the high extreme.

The Second, from Pingdom: 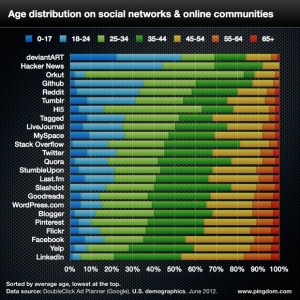 This one is fascinating to me. As always with this kind of research, accuracy depends on how they sampled, but even if it could be off by a bit, it still gives a big picture of the main social networking sites (which is what I assume the acronym SNS stands for) usage by age. I have no conclusions to draw, but maybe you do.