Most people do better with carrots than sticks. I just posted 3 best ways to reward people on your team over at Up and Running. As I wrote that, it reminded me of this. One thing I learned by coaching kids soccer. 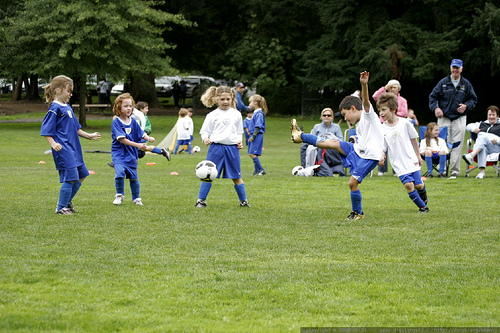 Of course you have to use common sense to make that work. Don’t go to extremes. People have to have real information about performance and problems. But seriously, are you repeating the bad news too often? And, if you are, is that working for you?

I had eight years of coaching little kids in soccer. Some kids were naturals and led the team and that was cool. But for those who weren’t so gifted, didn’t want to get the ball, or in some cases didn’t want to give the ball up, I learned to wait until they (even if it was accidentally) did the right thing. Then I’d shout that up to the skies. And, at the same time, I stopped steadily, constantly, repeatedly urging them to be more aggressive, or pass, or whatever.

With some kids it took patience, waiting for them to do the right thing. But it paid off big time when they did.

And I learned, running a business, that this basic principal applies to grownups as well as it does to little kids. Do you agree?

One response to “1 Thing Coaching Kids Taught Me About Management”